We pass Cerkes, Ilgaz, Tosya and Omançik before arriving in Amasya. These cities lie all between 400 and 1300m asl.  Accordingly, the landscape varies a lot: huge plateaus with spring flowers, fruit tree plantations (carries, apricots, nectarines..), cornfields, paddies, you name it. Additionally there are all the different colourful rock formations and mountain ranges. It is just beautiful to look at. We even forget that we have to bike uphill. Every now and then we have to interrupt our ride to take some pictures. Many of the locals are working as farmers. We see them working in the fields. This year they are rather late preparing the rice fields. Usually they start already in March. But this winter was hard and lasted longer than expected, which prevented them to sow the rice earlier. Interestingly, the cherries are already ripe and taste delicious.

The arrival in Cerkes was disillusioning! it was raining (again), the roads were muddy and dirty, and the only hotel of the town didn't really look appealing. But we had no other choice to book a room here as there was no other accommodation available. Luckily, the room was better than expected. Although it was very small, at least it was clean. Once we had stored our luggage, we could hardly move. And it was sooo cold! The heating didn't work. We had to put on our down jacket to keep us warm while reading and laying on the bed. Even though it is not really appealing to leave the hotel, we go for a little walk to get some impressions of the people and the surrounding before drink ing some tea to warm us a little bit. Isn't that the reason why we are travelling?

In Osmançik we stay in a hotel next to the petrol station. As we arrived there we were welcomed by some local journalists, town representatives and policemen who just were finishing their meal. They were curious to know about our travels. Luckily, the owner of the hotel spoke German very well and could help us translating. Shortly after these locals had left a group of Turkish tourists approached us. It looks as if we are some kind of attraction wherever we stop. A foto shooting was once more a must.

Tuesday, May 23 we had planned to ride to Merzifon, the next bigger city. Even though we had to go uphill, we were rather fast and arrived already at the destination shortly after lunch. What should we do here all afternoon, we were asking ourselves. So we decided to continue and ride for another 50km to Amasya. According to our map it should be an easy ride, mostly going downhill. What we hadn't considered was the heavy wind that suddenly came up. Instead of having an easy ride we had to pedal downhill. Some gusts were that heavy, that we hardly could keep our bicycle on track.

Amasya is a lovely city, located in a canyon, surrounded by mountains. The houses of the old part of the city are so called Konas, nice houses build mainly along the riverside. The hotel we stay in in such a Kona. We have a great view on the river and the mountains. The City Amasya has a long history. It was already mentioned in the 3rd Century bCh. A huge fortress is overlooking the city. In the 13th century it was even compared with the beauty and success of Bagdad. Moreover there are some rock tombs also from the 3rd century bCh. In the evening, the old town, the fortress and the tombs are illuminated in all kind of colours. It looks somehow kitschy but also very nice!

We spend 3 days in Amasya. The reason for it is, that we are waiting for our passports to be sent to us with the necessary visa for Iran, Turkmenistan and Uzbekistan. Today the mail already arrived, one day ahead of schedule. Super! We are happy that we can continue our travel with all necessary documents at hand.

As the weather finally is nice and warm we can enjoy the days here hanging around, do some sightseeing, be lazy for a change. Markus is learning the Turkish language and I have to admit, that he definitely speaks it better then I do! The stay in Amasya is almost like a vacation. 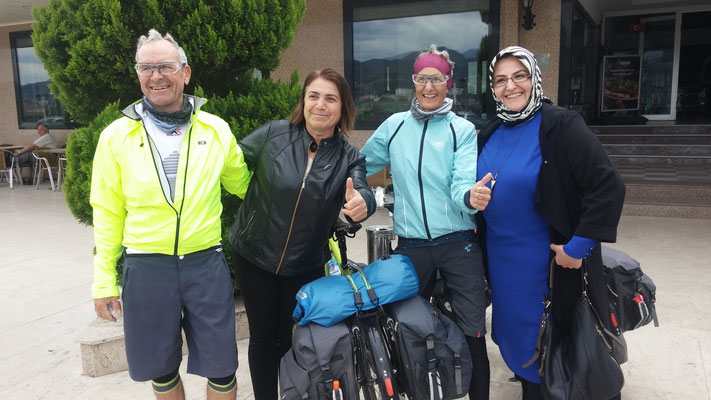